Slagharen History: The adventure from 1963

Theme Park & Resort Slagharen was founded in 1963 (at the time still as Ponypark Slagharen) by Mr. Henk Bemboom. Bemboom loved ponies and therefore bought a pony for his children. He liked this so much that he decided to bring the pony with him on his visits to markets. This grew into a traveling circus called the Shetland Show. He traveled with a total of fifty ponies along Dutch cities.

From old farm to resort

Bemboom bought a piece of agricultural land around an old farm and built 24 holiday homes here. The park was opened at Pentecost in 1963. The guests found it very special that a Shetland pony was present at each house. The number of ponies has grown over the years to 800! The holiday park was very popular and expanded quickly. More houses were added and a swimming pool was added later in the 1960s. There was a pony track around the pool where people could ride a pony.

In 1979 Pony Park Slagharen got a world class attraction. Prof. Mr. Pieter van Vollenhoven opens the Looping Star. The first roller coaster to roll over in the Netherlands. In addition, the Apollo whirligig and the Big Wheel Ferris wheel will be opened. 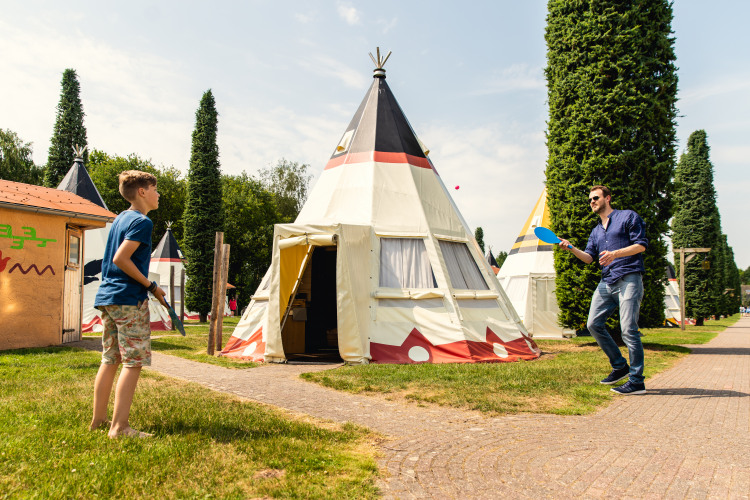 Start of the Wigwam World

In 1993 Pony Park Slagharen celebrated its 30th anniversary and the Wigwam World was opened. Visitors now had the opportunity to spend the night in a wigwam just like an Indian. In 1998 the name was changed from Pony Park Slagharen to Theme Park & Resort Slagharen. In 2009 the mascots Randy & Rosie were the new residents of Slagharen. This raccoon brother and sister live in the mill and can be seen several times a day in the amusement park and are the central part of the Slagharen logo.

From March 2012 Theme Park & Resort Slagharen is no longer in the possession of the Bemboom family. The park has been sold to the Spanish group Parques Reunidos. Parques Reunidos owns more than 60 theme parks, zoos and water parks worldwide. In 2013, the park celebrated its 50th anniversary and four new attractions were opened. In May 2015, the subtropical Aqua Mexicana water park was opened. The water park has an indoor and an outdoor area, ten slides, three of which are extra large and interactive.

At the end of 2016, the park will bid farewell to the Looping Star roller coaster, which will make room for the new Gold Rush roller coaster, which will open in April 2017. This spectacular roller coaster takes you from 0 to 95 kilometers per hour in three launches, two forwards and one backwards. In that year, the holiday park will also be expanded with 91 luxurious new Raccoon Lodges. This means that the park has more than 650 holiday homes and more than 200 camping pitches.

In 2018, Theme Park & Resort Slagharen will be 55 years old and a new entrance was built and the route on the large parking lot has been changed. In addition, the last 80 ponies disappear from the park, the Wild West horse show comes to an end and the entire entertainment is animal-friendly.

The Black Hill Ranger Path climbing park will open in April 2019. A unique combination of an exciting Rope course up to twelve meters high, various climbing walls and a 115 meter long roll glider. In addition, a long-cherished wish is also being fulfilled: The tunnel under the road in front of the park will be opened, so that all guests can safely reach the main entrance from the central car park.

The year 2020 is going differently than expected, because the park may only open two months later than planned due to Corona and various measures are being taken to prevent further spread of the virus.